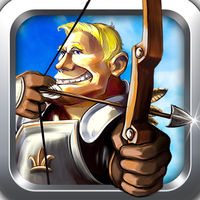 The biggest update ever! The Quest + Hit the Apple in one game!
Very addictive archery bow shooting game that combines outstanding graphics and physics-based gameplay!

The Quest game. Defend the Kingdom! Join the war against the army of villains lead by the evil Bloody Mask! Unveil the story, earn new armor, arrows and magic rings! Fight enemies that become stronger and win the final battle!

Apple shooting game – shoot the apple off mans head using a bow and arrow. Don’t miss or you might kill your opponent. Each level positions you further away thus increasing the difficulty…

Dear Customers!
Thanks for your comments!

If you have any ideas for the game, please write about them in your comments! We’ll try to add them and more interesting features in next updates.