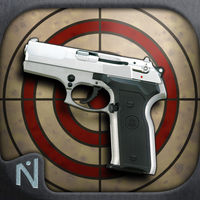 • TOP 5 APP • FEATURED AROUND THE WORLD BY APPLE •

Experience the game that changed the FPS genre forever. Match up against your friends, your enemies, or anyone in the world in the world’s first virtual reality shooting range!

• 2 MILLION USERS IN 1 WEEK •
Join over 50 million players worldwide and find out why Naquatic apps like Shooting Showdown and Guncrafter have lit up the top charts and been featured by everyone from Apple to IGN, AppAdvice, and TouchArcade.

• DROPPING JAWS THE WORLD OVER •
‘The closest experience you can have to the actual thrill of being out on the range.’ – Sgt. Jeremy A. (USMC), Advanced Weapons and Tactics Instructor

‘Bursting at the seams with multiplayer insanity.’ – Free Apps Arcade

‘Dust off your weapon and prepare to take aim.’ – AppAdvice

CALLING ALL SHARPSHOOTERS
• Virtual reality controls let you take aim with your device– how accurate are you really?
• Head-to-head multiplayer through GameCenter
• Physics-based shooting challenges with destructible targets
• Practice range for honing your skills
• Leaderboards and Achievements to track your improvement
• Unlockable guns and upgrades