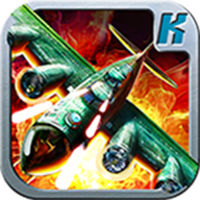 Get behind the powerful top machine gun in the turret of a B-17 Flying Fortress bomber in this high-octane 3D shooter and blast the enemy planes out of the sky. Experience the blistering-hot, immersive action of aerial dog fighting as never before when you complete the missions and become the Turret Commander!

Your bomber is under attack from all directions, and the only thing keeping it in the air is a rain of red-hot bullets streaming from your turret guns. Keep your plane flying, and you and your colleagues alive as you battle it out in the skies against dozens of enemy aircraft.

Survive through more than 20 different missions, keep fighting as long as possible in endless mode, and work your way up to becoming a renowned fighter ace. But most important of all, you must hone your aerial combat skills, improve your accuracy and get everyone back on the ground alive.

You are the Turret Commander!